Technical Dispatches, as related by the minds behind Karman+, are intended to bring readers behind the scenes and into the research. In this edition, Lauri, a Finnish astronomer, Ph.D. and asteroid characterization specialist at Karman+, shares insights into his recent research and how his scope of understanding and interest has evolved since joining the team.

Asteroids are not unfamiliar territory for me — my Ph.D. research was primarily concerned with mass and orbit determination of individual asteroids — but the research I’ve been doing as the asteroid characterization specialist has expanded the scope of my work considerably. Working in tandem with our mission design specialists, I’m now particularly focused on uncovering and identifying asteroids that are optimal mining targets in support of our mission to provide abundant, carbon neutral and sustainable resources via Near-Earth Asteroid (NEA) mining.

Most of us rightly consider the population of large NEAs to be well known and documented with nearly all of the expected asteroids already discovered. What has our attention is the state of discovery relative to asteroids with diameters of less than a kilometer. These asteroids are much less known to us, as their smaller size and dimmer status make them significantly more difficult to observe, but as with other celestial objects, we also understand smaller asteroids to be significantly more numerous. Statistically, it follows that out of the entire NEA population, most of the ideal asteroid mining targets have almost certainly not yet been discovered. This also indicates there are insights to be gained from scientific and statistical analysis of the NEA population that sheds light on how we think about mining asteroids — even those not yet discovered.

Statistically, it follows that out of the entire NEA population, most of the ideal asteroid mining targets have almost certainly not yet been discovered.

For me, this news is as exciting as it is challenging. It’s true that very little is known about the physical parameters of most known NEAs beyond their orbits and absolute magnitudes, or brightness. To demonstrate, as of April 2022, the Minor Planet Center (MPC) cited 28,000 known NEAs. Of those 28,000, fewer than 2,000 have known geometric albedos. In NEA mining, the geometric albedo — a parameter that describes the proportion of the sunlight that reaches the asteroid and is reflected back to us — reveals characteristics that tell us if we are on the right path or not. Broadly, we can observe that carbon-rich asteroids are likely to be dark and have notably lower albedos than silicaceous asteroids. Lower-albedo objects can therefore be characterized as “darker” objects than those of high albedo and similar size. This is crucial knowledge not only in understanding the nature of an asteroid, but in estimating its size. 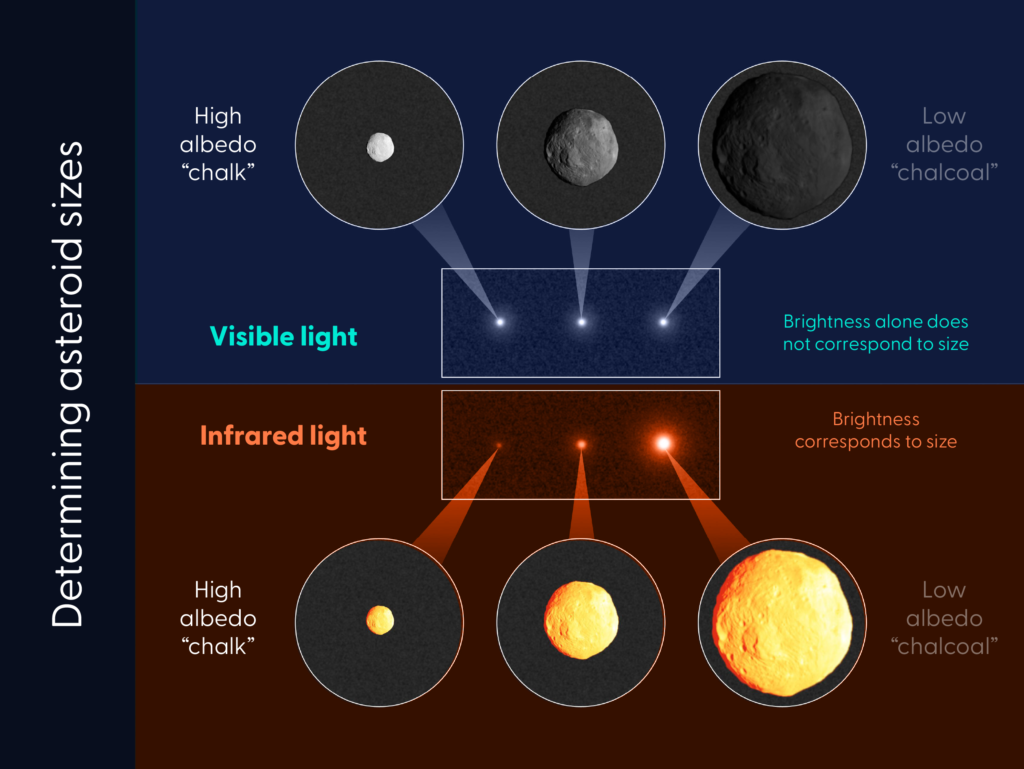 Figure 1. An illustration of the correlation between an asteroid’s size and albedo. Image credit: NASA/JPL-Caltech

In addition to the albedo, we must understand the reflectance spectrum of an NEA to ascertain if it is a viable target. The reflectance spectrum tells us how much sunlight an asteroid reflects as a function of wavelength, and likewise corresponds to an asteroid’s surface parameters. For example, as Figure 1 illustrates, although it is difficult to determine size from visible light alone (albedo), since a high albedo (“chalk”-like) but smaller object may appear as bright as a low albedo (“charcoal”-like) but larger object, a more clear correlation can be find with infrared light and size.

Spectroscopy with meteorites found on Earth that share similar spectra has proved an exceptional opportunity to glean more insight into the accuracy of characteristics associated with each class based on compositional analysis and laboratory measurements. As a result, carbonaceous asteroids, in the C class, are believed to have a relatively large amount of water as compared to other asteroids. Progress has likewise been made in specifying other features that suggest the presence of water. Perhaps of greatest note are absorption features noted around the wavelengths of 0.7 and 3 micrometers.

Here again, what is known begets tremendous insight, but it represents the proverbial tip of the iceberg — or in this case a sliver of the cosmos. In practice, observed spectra only exist for a small fraction of the known NEAs. Although this presently represents a challenge, it is not an insurmountable one. New astronomical observations are being conducted constantly, and correspondingly the number of NEA detections alongside measurements of parameters such as albedo and spectra will grow steadily over time.

We can also expect a significant uptick in data as new surveys and telescopes come online. Consider this: The Legacy Survey of Space and Time (LSST), based at the Vera C. Rubin Observatory, is slated to begin operations in 2024 and is expected to discover well over an order of magnitude more NEAs than are currently known. The impact of that information cannot be overstated, even with the knowledge that this massive step forward will still leave the majority of the estimated NEA population unknown to us. But even as traditional methods of discovery are necessarily beholden to scientific development and instrument launch, alternative means to characterize NEAs are emerging.

One such path is synthetic models, in which synthetic populations are generated based on a design that seeks to match the true underlying population. This approach has captured our attention at Karman+. We are working on improving and extending a state-of-the-art NEA population model originally developed by my Ph.D. advisor, Mikael Granvik, and his collaborators (Granvik et al, 2018). This model describes the population in terms of the underlying orbital and absolute magnitude distributions for seven distinct Escape Regions, or ERs. The ERs refers to the regions of the main asteroid belt from which the NEA population originates.

Our work has focused on extrapolating the Granvik model, which originally included asteroids with a maximum absolute magnitude of 25, to incorporate asteroids of larger magnitudes, and thus dimmer and smaller asteroids. We were successful in expanding the model and increasing the coverage across the entire population. To do so, we took cues from the study of Jedicke et al. (2018) who used a slope of $N(<H) \prop 10^{\alpha H}$ where $\alpha = 0.54$. We opted to do the same for the first incarnation of our expanded NEA model. Encouragingly, the results so far have been in line with other recent works studying the NEA populations. An example result produced by our model can be seen in the figure below, it predicts the cumulative total of NEA objects as a function of absolute magnitude versus the currently known NEA population. 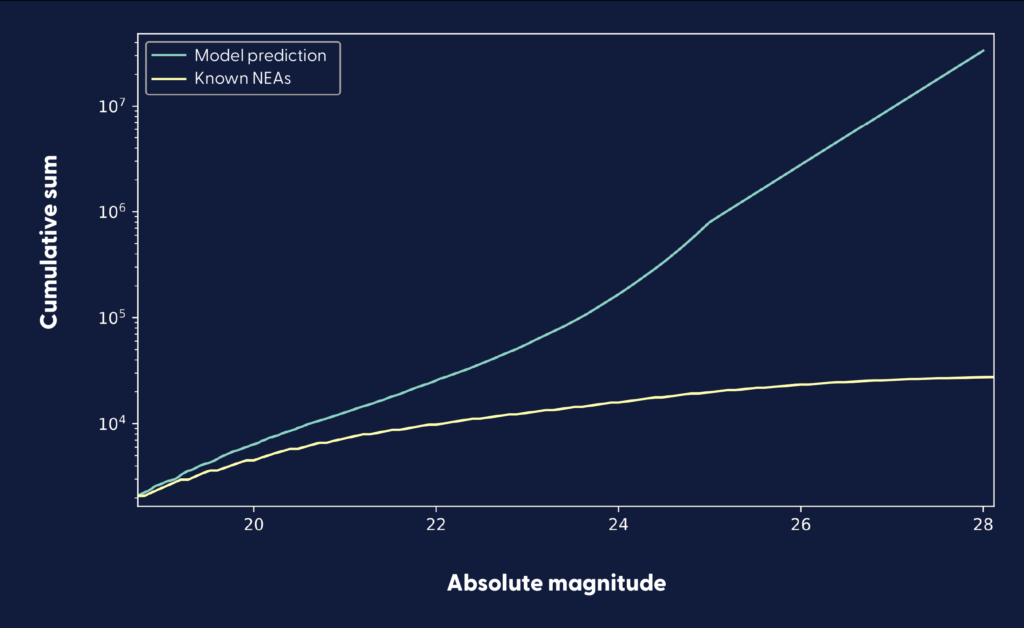 Ultimately, this illustrates the central challenge we have explored in this technical dispatch. It is apparent that at low magnitudes, the predicted total population is very similar to the currently known population. However, a clear and growing discrepancy becomes evident as one examines the values at higher magnitudes. Only a tiny fraction of the population across the magnitude range we study has so far been observed — there is still so much to discover.

An alternative view of our NEA model is shown in the next figure, which describes the orbits of our synthetic population in terms of semi-major axes versus eccentricities. Simultaneously, the color-coding describes the ERs from which asteroids in given orbital regions originate. 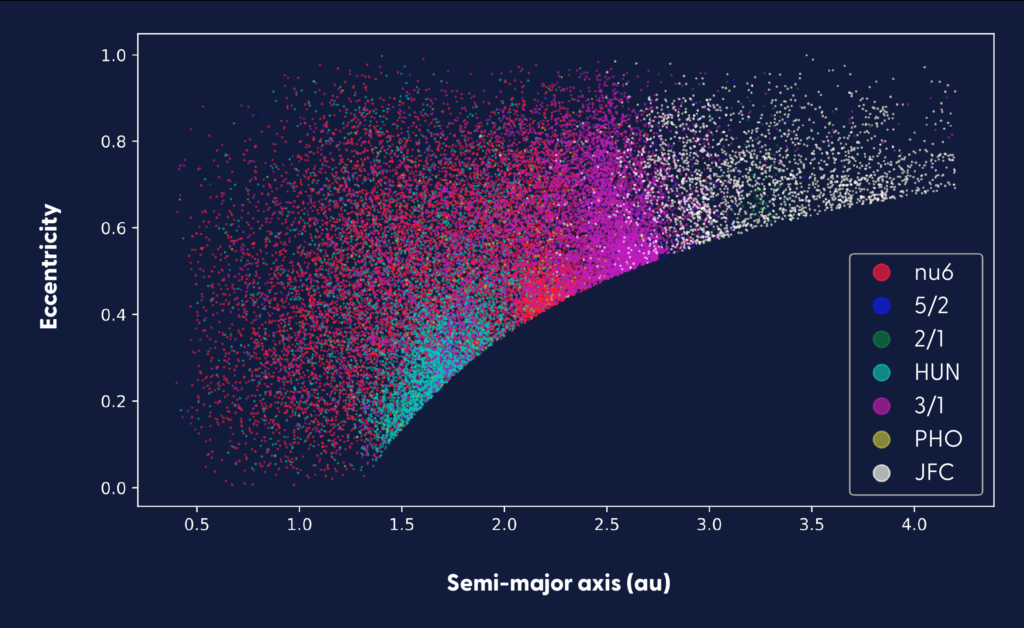 Figure 3. An example population of synthetic asteroids generated by our model in terms of eccentricity and semi-major axis, with asteroids from different escape regions color-coded. Nu6, 5/2, 2/1 and 3/1 corresponds to the orbital resonances in question, whereas HUN represents the Hungarias asteroids, PHO the Phocaeas, and JFC the Jupiter-Family Comets.

Taken together, this information goes into territory well beyond the scope of this technical dispatch, but notably, it reveals that the ER of an asteroid also yields clues about its characteristics. Many, including the team here at Karman+, assume that the population of asteroids originating from a specific ER belt will be very similar to that of the main belt around the ER in question. Indeed, recent work from the MITHNEOS survey, (Marsset et al. 2022), validates this assumption. The survey found that the distribution of spectral classes of NEAs originating from specific ERs are nearly identical to the spectral distributions of main-belt asteroids around the ER in question. So, we can reasonably use these results to assign spectral classes to individual asteroids in our synthetic population while also generating albedos based on observed albedo statistics for the spectral class in question. Ultimately, this yields a well-described synthetic population.

Which begs the question, how does a synthetic model inform practical mission design? It’s true, we certainly cannot mine synthetic asteroids and we need to observe real-world targets to properly plan our missions. But, our population model does provide probability distributions that describe the expected populations of asteroids meeting our criteria for spectral class, size, delta-V requirements and orbital region. It is this data that will make us better, more strategic mission planners as we consider the best path toward making asteroid mining a reality.

It is this data that will make us better, more strategic mission planners as we consider the best path toward making asteroid mining a reality.

Although we have only just begun to glean everything that can be known about the NEA population, the possibilities of what we can project and discover are exhilarating. No shortage of work lies ahead in terms of both our synthetic population model and the characterization of potential real-world asteroid mining targets, but every bit of effort is outmatched by potential opportunity. I’ll take the liberty here to speak on behalf of the whole Karman+ team as I say that the practical challenges of our NEA modeling efforts have only hardened our resolve and energized our minds. As you’ll no doubt hear — and see — in future technical dispatches, our journey to accelerate the inevitable is just beginning, and it’s already expanding our understanding and aspirations.